The painting 'The Mothers, 2011 (see Appendix 1) fascinates me as the movement of the mark making works with the painterly area's extends the physicality of the bodies within the piece, the marks make the children seem like they are squirming, so alive! Constant flow of energy like electricity slashes around them, in contrast the face of the mother reflects exhaustion and blankness, shows a reality of being a mother. In public we have an armour that we wear, reflecting that we cope we are born to do this, but we know the feelings, it is fear of failure as parents that I feel and touches me deeply.
Tonally there is a natural depth, and the linear application creates a sense of chaos, and fluidity that extends the image out of the canvas, you to offer support to the mother, elevating the load that she is struggling to carry. 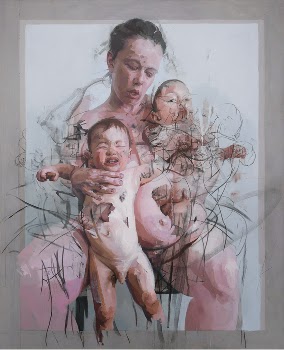 Saville states witnessing plastic surgery made her work more expressive in the way that she had think as if she was applying skin/cover to the canvas, the skin she painted was an artifact and had to be realistic especially on such a large scale, she felt that she was exploring the myth of the feminist ideal.
Saville looks at her work as figurative not portraiture, she recognises that the work is overtly autobiographical.
When working with carcasses felt the masculine aspect of herself as part of the work, she sees the work as landscapes, and believes that she is a frustrated abstract painter, with a passion for the figurative.
Furthermore pregnancy and childbirth really gave her the sense movement and the work became an energetic act. The reality of reproduction, life and birth, there is such power to birth, the babies looked ancient and also new, she was part of a real human history when she gave birth.
Saville goes on the explain that due to the fast growth of the children that drawing allowed her to show the human development within a short period of time, helped her to explore movement.
Then she discussed how art history has influenced her work, Saville explains that having children has given her confidence in her ability, also that using the memory of art history has allowed her to dip in as if from a large soup bowl, but not a direct reference she declares that she is not a post modernist artist, and yet she has been influenced by art of the past.